On this week's episode of Barrel Room Chronicles, I visit Frey Ranch in Fallen NV. So if you are watching this on www.BarrelRoomChronicles.com, YouTube or Spotify, you are in for a treat! After our in person interview, Colby takes us on a private tour of the distillery and later in the show Chef Louise Leonard dishes out some good cooking ideas with the Frey's Single Grain Oat Whiskey!

The Frey Ranch is a storied legacy of principles, pulling Themselves up by our bootstraps all with a dash of good humor. You see, Colby Frey didn’t just grow up playing on hay bales in these fields. From an early age he put himself to work repairing tractors, raising barns and working the land, sitting elbow to elbow with the family and ranch hands that taught him the value of doing things the right way, not the easy way, with a wink and a smile. Born a farmer, now also a distiller, this young spirit of can-do ingenuity shows up in every pour of our straight bourbon whiskey. We don’t let the elements of weather or wear get in the way of farming hard for the bold and bright passion of what a whiskey of the land should be.

So, after a hard day’s week, when the sun lays down to rest and the fields quietly hum, turn to an amber glow farm scape that invites you to kick off your work boots and enjoy the grains of our labor. Drink it neat or in a cocktail, either way, you’re welcome on the Whiskey Farm.

Frey Ranch Straight Bourbon Whiskey. Be good to the land and the land will be good to you. 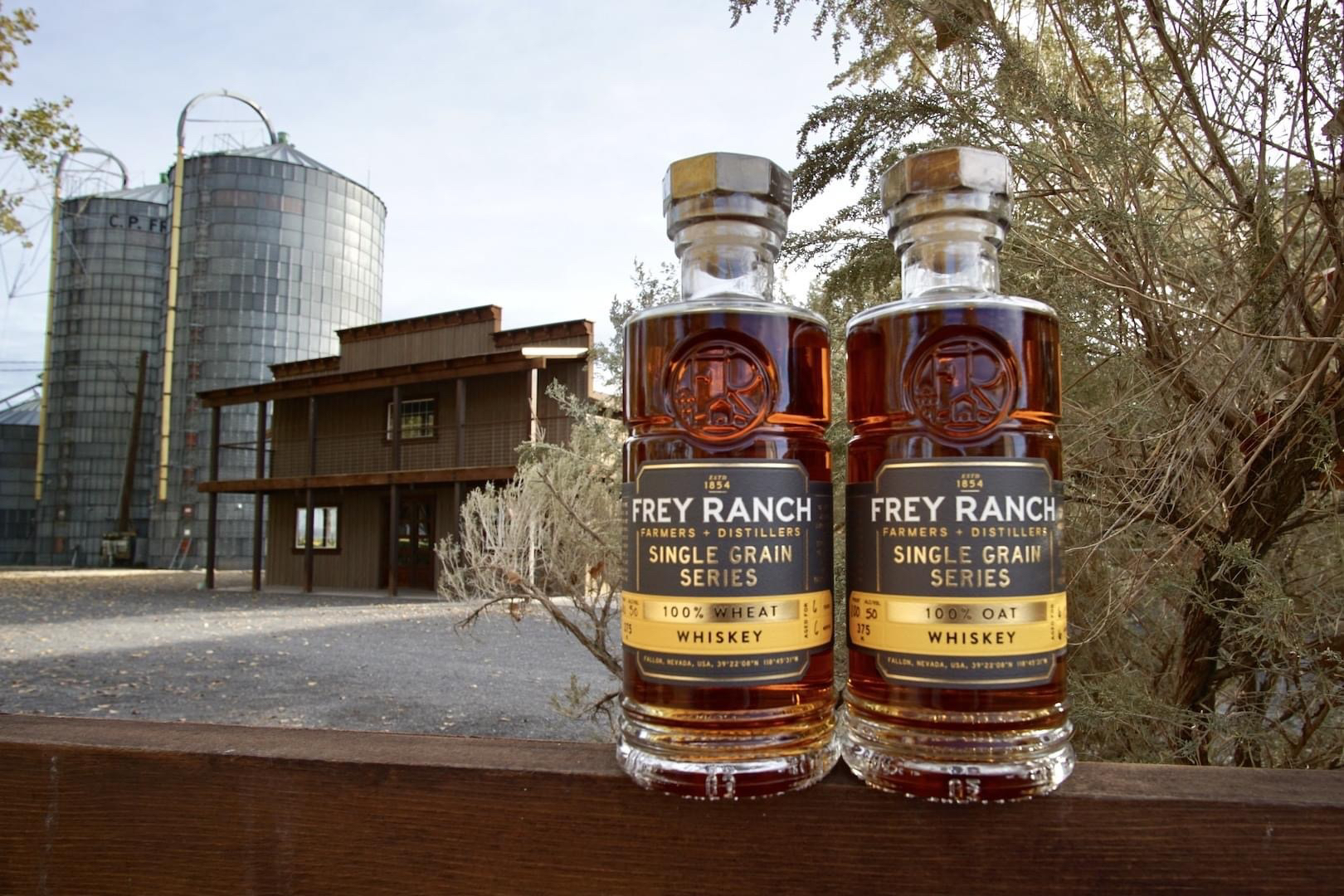 (FALLON, NV; November 10, 2021) — Frey Ranch Distillery Co-Founders Colby & Ashley Frey are pleased to announce the launch of the first two expression from what they have named their  “Single Grain Series”, a line of whiskeys created to highlight the individual grains grown on their 1,500 acre Ranch: Frey Ranch Single Grain 100% Oat Whiskey (50% ABV, 375ml, $59 SRP) and Frey Ranch Single Grain 100% Wheat Whiskey (50% ABV, 375ml, $49 SRP), both of which are made entirely from grains grown and malted on-site and aged for six and a half years in barrels. Located just east of the Sierras and boasting lush farming conditions due to its proximity to the Lake Tahoe Watershed, Frey Ranch Distillery is a year-round working farm and one of the rare whiskey producers that grows 100% of its grains on-site since the distillery’s founding in 2006.

The releases come after nearly decade of planning, patience, and creativity that reflect the early pioneering spirit of co-founder and self-proclaimed “Whiskey Farmer” Colby Frey, a fifth-generation Nevada farmer. The grains used in these whiskeys were planted in the spring of 2014; a year later after harvest, Frey and his team began the distillation process with the intention of creating whiskeys that highlight the flavors of each specific grain. Frey Ranch will release more expressions in its limited Single Grain Series in the years to come; 12 unique whiskeys are currently aging in barrel.

“The release of our Oat and Wheat Whiskeys has been a long time coming, and we’re thrilled to see what whiskey enthusiasts think of these new expressions,” says Frey. “Farming these grains ourselves gives us the opportunity to explore the unique flavor profiles of these single-grain variations without influence from any other grains in the mash bill, and discover how they can stand out in the whiskey world.”

Produced with soft white winter wheat grown in 2014 on the Frey Ranch in Fallon, NV. The extended aging regiment in full 53-gallon whiskey barrels impart unique flavors and an aromatic profile of Bananas Foster, butterscotch, and orange peel, backed up by a long finish of Nutella, honey, tea chest, and espresso. Production of the initial wheat whiskey is limited to less than 2,500 bottles.

The oat grain for this expression was grown and harvested from the Ranch’s 14-acre field adjacent to the distillery. Drier on the palate, the Oat Whiskey offers a nose of oatmeal, earth, leather, and peanut brittle to complement a palate of dried apricot, nutmeg, peanut, dried peach, and peat. Production for the initial run is limited to less than 1,000 bottles.

Follow Frey Ranch Distillery on social media to keep up with the latest news and announcements:

Barrel Room Chronicles is a production of 1st Reel Entertainment and is distributed by Anchor.FM and is available on Spotify, Apple, Google, iHeartRadio, Amazon and wherever you listen to your favorite podcasts.

Barrel Room Chronicles is a production of 1st Reel Entertainment and can be seen or heard on Anchor, Spotify, Apple, Google. Amazon Music, iHeartRadio, Breaker, Public Radio and more. 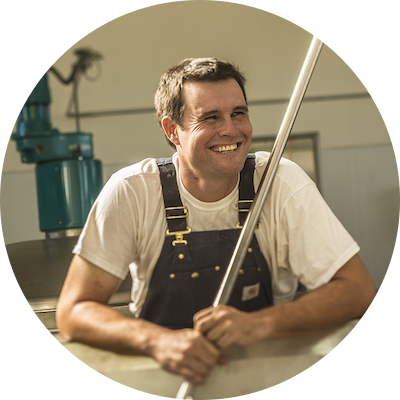 Tucked away in Northern Nevada’s Lake Tahoe Watershed, Frey Ranch Distillery is proud to be the state’s first and only whiskey producer to grow 100% of its grains on-site. The Frey family has a long legacy of farming in this region dating back to 1854, which continues today with Frey Ranch CEO, Co-founder, and self-proclaimed “Whiskey Farmer,” Colby Frey, who started the distillery in 2006 with his wife and Co-founder, Ashley.
Colby is a fifth-generation farmer who grew up working on his family’s 1,500-acre ranch, where he was involved in planting, growing, and harvesting crops like alfalfa, wheat, and barley alongside his father, from whom he inherited his passion for all things agriculture. The Frey family values a common-sense approach to sustainable farming, with Colby’s inspiration to build a distillery born from a desire to create a distinctive, long-lasting product from the quality grains his family has been growing and perfecting for generations. The family has long abided by the motto, “Be good to the land and the land will be good to you,” which is engraved on the bottom of each bottle of Frey Ranch whiskey.
From farming and harvesting grains to malting barley on-site, all the way through distillation and maturation, the Frey Ranch team is dedicated to crafting the highest quality whiskey, which doesn’t leave the ranch until it’s bottled and ready to be enjoyed. With its flagship Straight Bourbon
Whiskey, Frey Ranch is pleased to produce a whiskey that embodies the Frey family’s passion for farming and pride in their home state of Nevada, and a selection that can be enjoyed for many years to come. 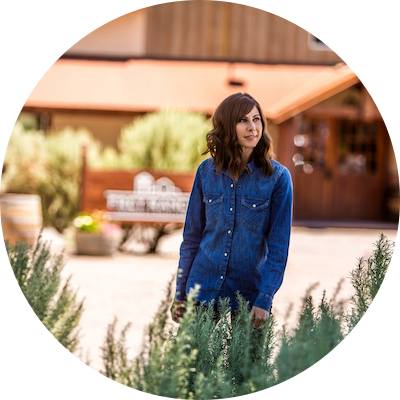 While Ashley Frey may not have grown up on a farm, today it’s where she feels most at home. Hailing from the small town of Gardnerville, Nevada, Ashley comes from a close-knit family who taught her from an early age that there are multiple routes to success. It was this foundation that inspired Ashley, alongside her husband Colby, to forge a career in the world of whiskey and in 2006 establish Frey Ranch Distillery in Fallon, Nevada.
Ashley enrolled at the University of Nevada, Reno in 2001 to pursue a degree in Public Relations and it was here that she met her husband, Colby Frey, a fifth-generation farmer whose agricultural ambitions could not have been more different from her own. Despite this, the two hit it off and the Freys welcomed Ashley into their family – and eventually, the family business – where she got her first taste of what was to come by lending a hand with bookkeeping for the ranch.
After spending several years working in casino marketing and legal services, Ashley took a leap of faith when she and Colby founded Frey Ranch Distillery on his family’s 1,500-acre farm in the spring of 2006. While the early days were often long and exhausting – with Ashley stepping in to help wherever she was needed, including on the bottling line – she takes pride in the hard work that made Frey Ranch Distillery what it is today, and has leveraged her PR and marketing background to help grow the company over the years.
In addition to having a hand in day-to-day business operations, Ashley is closely involved in the branding process and recently oversaw the redesign of Frey Ranch’s packaging, from the artful bottle design and distinct metal toppers down to the custom label color. Ashley also established and still
oversees the visitor experience at Frey Ranch, hosting anywhere from a dozen to 100 guests at the on-site tasting room each weekend. What she loves most about her job is that no two days are alike. On any given day she might be in the tasting room interacting with guests, in the office reviewing bottle and label designs, or on the road hosting a tasting event with Colby.
While she enjoys the occasional getaway to nearby Lake Tahoe, Ashley is just as content spending time on the farm with Colby, their two children, 7-year-old Alice and 4-year-old Charley, and their team of 12 full-time employees, who she has come to view as a second family. “We live where we work and we work where we live,” says Ashley. “And ultimately, our brand is an extension of our family.”